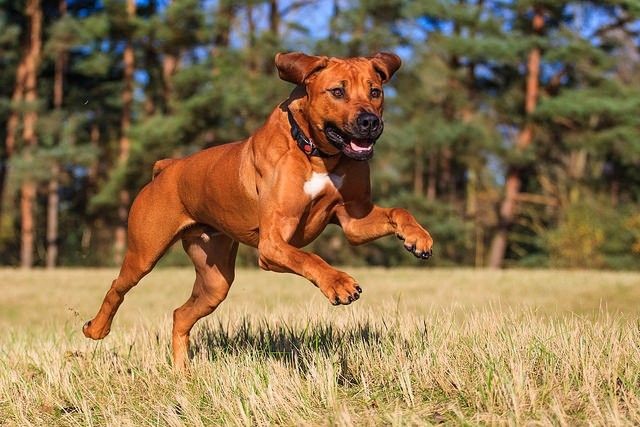 Other than cows and chickens, there’s no better animal for homesteading and off-grid living than man’s best friend. For thousands of years now dogs have helped us hunt our food, alert us of danger and even protect us from our enemies.

We’ve even gone as far as teaching dogs how to perform jobs such as herding and pulling sleds, making this animal the perfect companion for someone who wants to live off the land. However, with so many different types of dog breeds available, you really need to think long and hard about which breed will be best for homesteading or off-grid living.

If you want a powerful guard dog that can protect you and your family, then consider getting a breed such as the Rottweiler or Chow Chow.

More interested in a reliable hunting dog? Then something along the lines of a Rhodesian Ridgeback or Dogo Argentino will surely suit you well.

Or better yet, why not get a dog breed such as the German Shepherd that is capable of both herding animals and guarding the home?

No matter what your choice though, any dog will be sure to make a great companion in times of needs. As long as you make sure to take your time and do the proper research you should be sure to end up with a dog that suits your needs.

Below I’ve gone ahead and listed the top 5 dog breeds for homesteaders and survivalists living off the grid. If you don’t agree with this list then be sure to let me know in the comment section at the end of the article, I’m looking forward to seeing which other dog breeds readers think are best for homesteading and off-grid living.

As a lazy prepper, there is no other dog breed I would rather have on my side than a Chow Chow. While this fluffy lion dog may be rather shy and aloof around strangers, these traits combined with their devout loyalty makes them one of the most protective guard dogs around.

And while their low energy levels may not make Chows the best dogs for hunting, they do have an extremely high prey drive that will cause them to relentlessly hunt down anything that crosses their path. No matter whether it’s a squirrel, coon or possum, the Chow Chow will never give up the chase as long as it has a chance.

Unfortunately, Chows Chows can manage to become quite aggressive if not properly trained. While this aggressiveness may prove to be useful when living off the grid, it’s not a good trait for a dog to have when living in a well-populated area. Make sure to properly socialize your Chow from a young age though and you will be sure to have a wonderful loving dog that will do anything to keep you safe.

If you’re looking for a guard dog that is also capable of hunting big game, then look no further than the Dogo Argentino. The Dogo Argentino, also known as the Argentine Mastiff, was created by breeding the Cordoba Fighting Dog with 9 other dog breeds (such as the Pointer, Bull Terrier and Great Dane) to create the ultimate dog for hunting big game.

This perfect combination of dog breeds allowed the Dogo to retain the majority of the traits that made the Cordoba Fighting Dog such a great hunter, while simultaneously eliminating some of its aggressiveness and inability to hunt in a pack.

Other traits that make the Dogo Argentino a desirable dog breed for preppers include its fearlessness, loyalty, agility and overall willingness to never give up. And while the Dogo was originally bred for hunting animals such as the wild boar, this courageous dog has even been known to take down much more dangerous animals such as the Mountain Lion.

Watch this video below of how a loyal Dogo was able to take down a Mountain Lion to save the life of two young girls.

Rottweilers, also known as Rotts or Rotties, is considered to be one of the best guard dogs in the entire world. With a total bite force of around 326 pounds (strongest bite force of all breeds) you surely don’t want to get caught on a Rottie’s bad side.

And while Rotties are commonly known for their strength and ferocity, they’re also known for being highly intelligent, affectionate and loyal.  All of these qualities mix together to create one highly versatile dog.

Originally Rottweilers were bred for jobs such as herding cattle and pulling carts, but they have since been used as police dogs, guard dogs and even guide dogs for the blind. If properly socialized you shouldn’t have to worry about your Rottweiler around strangers, but you can be sure that if someone tries to harm you they’re not going to have a good time.

There is no dog better suited for the survival lifestyle than the Rhodesian Ridgeback. This highly robust dog breed is capable of surviving on very low rations of food and water (temporarily) and is built from the paws up to be able to run up to 30 miles at a time across rugged terrain.

While their thick padded feet protect the Ridgeback from the wear and tear of running on rough terrain, their muscular body and strong bone structure are what aids in their ability to run non-stop for such a long period of time.

What’s even more impressive about the Rhodesian Ridgeback though is that they were originally bred in South Africa to hunt lions. While they may not have actually killed the lion themselves, they would work together in a pack to keep the lion at bay until the hunter could move in and get the kill.

This high amount of bravery makes the Rhodesian Ridgeback a great dog for both hunting large animals and guarding the home.

Having ranked 2nd in bite force and 3rd in intelligence, there’s no denying that the German Shepherd is one of the best overall dog breeds for the off-grid or homesteading lifestyle.  While the strength of the German Shepherd helps them with guarding the home and stopping intruders, their intelligence allows them to be easily trained so they can quickly learn and follow new orders.

Other traits that the GSD (German Shepherd Dog) is commonly known for include their bravery, loyalty and keen sense of smell. Combine all of these traits and I’m sure you can see why the GSD is currently the most widely used police and military dog in the world.

You don’t have to be in the police or military to make good use of a German Shepherd though, as they’re an extremely versatile dog breed that can handle virtually any job it’s given (except maybe hunting). Common jobs for a German Shepherd include herding (hence the name), guarding, assisting the handicapped and even helping out around the yard.

Besides being a great all-around working dog, German Shepherds are also highly affectionate and will do anything to protect a member of its family. If you have young children or plan on having children then the GSD is definitely a great dog to have around.

Be warned though, German Shepherds are yet another breed that can be a little aloof and suspicious of strangers, so proper training is recommended.